Students examine different types of soil that have been mixed with water and allowed to settle. Next, they work with a soil model to investigate its components (sand, silt, and clay) and learn how the properties of these components affect the passage or retention of water through the soil and the amount of air in the soil. Grades 9-12

* Bubble tea straws are optimal for this activity. You may also find them labeled as smoothie or milkshake straws. They have a larger diameter than a typical straw (3/8–1/2 inches [1–1.2 cm] diameter and 8–9 inches [20–28 cm] long). Some grocery stores carry these, and Asian food markets may be a good source. You can also purchase these online. If you have a choice, clear straws are best but may be harder to find. Clear with colored stripes also work. Colored straws can work (pastel colors are better than brighter colors), but it can be more challenging to see the water level in the straw because of the color. If you need to use the colored straws, sometimes a flashlight held behind straw can help make the waterline easier to see.

** Try to obtain coarse sand such as that used for home improvement products. Clean, fine sand may not allow water to pass as readily as most sands found in soils.

*** One alternative is using Feldspar, a powdered clay found at some craft or hardware stores. If your school has an art program that includes ceramics, you may be able to get a small amount of clay from the art teacher. You will need less than 1 pound (about the size of a baseball) of a stoneware clay (not too gritty). Other options for obtaining clay include an art supply store, a hobby supply store, or a local potter/ceramic artist. Please note the polymer “clays” that you cure in an oven will not work for this activity. You need a natural clay.

**** Baby powder is used as a substitute for silt because it is easily obtained and because it has particles approximately the same size as silt. Purchase plain baby powder—not the kind with cornstarch included.

***** The drink cup lids are the kind you find at fast-food restaurants or convenience stores for fountain sodas. The size is not critical because the lids do not need to fit the cups or beakers that you use. The lids simply need to be large enough to rest on top of the cup and hold the straw in a vertical position. The hole in the lid may not be large enough for a wide, bubble tea straw. If that situation arises, gently use your finger to enlarge the hole (being careful not to make it so large that it will not hold the straw).

infiltration: to pass through a substance by filtering or permeating

loam: ideal garden soil that has a well-balanced mixture of sand, silt, and clay

percolation: the movement of water within and through the soil

permeability: the ability of soil to allow the passage of water

porosity: the percentage of soil volume that is not occupied by solids

Soil Formation: Most people take soil for granted. In fact, “soil” has a negative connotation. We call it dirt and wash it off our clothes and our bodies. In reality, soil is essential to our survival and that of nearly every organism on Earth. Our planet is mostly made of rock with an iron-nickel core. Plants and animals, including us, occupy a thin veneer on its surface. Our existence is possible because of a thin layer of soil that comes between the planet’s rocky interior and us.

Soils vary. They are natural expressions of the environment in which they form. Scientists recognize five main factors that influence soil formation: 1) parent material, 2) climate, 3) living organisms, 4) topography, and 5) time.

Of course, in addition to these five factors, human activity also can influence soil formation. Agricultural practices and urban development especially can interfere with the naturally occurring process of soil formation.

Soil Horizons: The gradual process of soil formation produces a series of horizontal layers. A soil horizon is a layer generally parallel to the soil surface, whose physical and chemical characteristics differ from the layers above and beneath. A given type of soil usually has three or four horizons. Horizons are characterized by the obvious physical characteristics of color and texture. The formation of soil horizons is influenced by factors such as air, water, sunlight, and plant material. The weathering of the parent material occurs first at the surface and then works its way downward. This means that the uppermost layers are changed (weathered) the most, while the deepest layers are the most similar to the original parent material.

To visualize the soil horizons, scientists dig a hole several meters deep to expose the layers. Most soils display a similar pattern of horizons. Each horizon is labeled with its own capital letter that identifies its place. A typical soil horizon sequence is described as O-A-B-C-R. 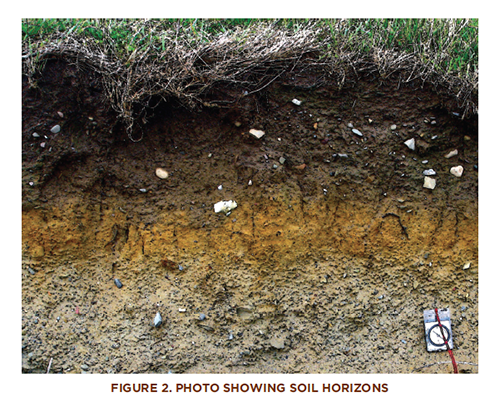 Soil Triangle: During soil formation, inorganic material is broken down by weathering into particles of various sizes. Soil texture refers to the relative proportions of different-sized particles found in the soil. Scientists classify soil particles into three categories. The smallest particles, which measure less than 0.002 millimeters, are called clay. Clay is important in holding nutrients. Clay particles form plate-like structures that attract and hold nutrients through chemical bonds. These nutrients can be displaced off the clay by another nutrient, absorbed by a plant root or soil microbe, or chemically absorbed into the clay particle itself. The next-largest particles are called silt. Silt particles range in size from 0.002 millimeters to 0.06 millimeters. Sand refers to the largest particles. Sand grains range in size from 0.06 millimeters to 2 millimeters. Soils vary in their proportions of clay, silt, and sand. Soil scientists classify different soil types using the soil triangle. Each side of the soil triangle represents the amount of a particle of a certain size—clay, silt, or sand. The relative amounts of these three soil components intersect within the triangle and determine to what type of soil those proportions correspond. 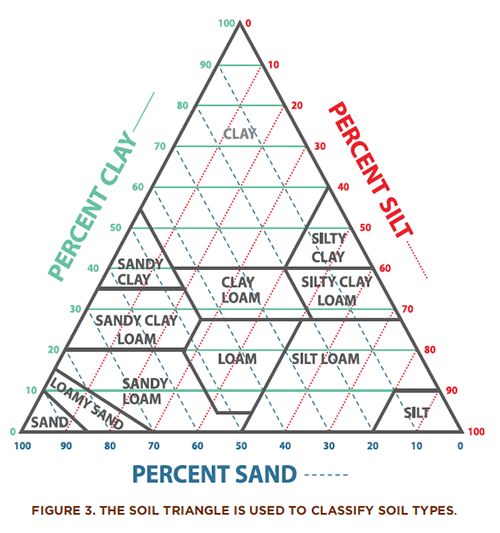 The ability of a soil to accept and retain water is largely determined by the relative amounts of clay, silt, and sand present. Porosity refers to spaces in the soil that can hold either air or water. Permeability is defined as the rate at which water can travel through soil. Table 10 lists properties of particle size that relate to soils’ interactions with water. Soils with desirable properties for farming are called loams. Loamy soils typically contain about 50 percent air space, which allows root systems to “breathe” (i.e., obtain O2 for respiration). The solid half of loamy soils is about 90 percent minerals and 10 percent organic material. Usually, loamy soils have names that more accurately reflect their composition, such as clay loam or silt loam.

Although the organic fraction of most soils is small in volume compared to the mineral fraction, it plays an important role in supporting plant growth. The organic material is composed of living organisms, plant roots, and plant and animal residue. A single gram of healthy topsoil may contain 100 nematodes (small roundworms), 1 million fungi, and 1 billion bacteria. Earthworms and a wide variety of insects may be present in smaller numbers. Organic material contains a significant amount of nutrients, and it, together with plant roots, helps

The soil is a “bank” for nutrients that are taken up by plants, and these nutrients must be replenished for continued plant growth. Before the advent of modern agriculture, farmers relied solely upon tillage to break down existing organic material and release existing soil nutrients. This practice is still used in many less-developed countries. 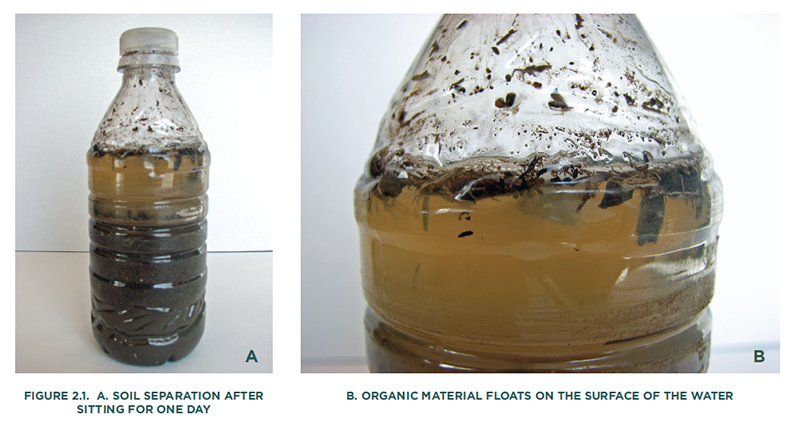 Students will learn how the composition of soil affects the percolation of water by setting up columns using sand and baby powder (to represent silt). The teacher will demonstrate the clay column.

Students consider how soil is usually a mixture of the three major components (sand, silt, and clay) and the amounts of each component influences plant growth.

Geography Standard 7 (Grades 9-12): The physical processes that shape the patterns of Earth's surface.

CCSS.ELA-LITERACY.CCRA.L.6 Acquire and use accurately a range of general academic and domain-specific words and phrases sufficient for reading, writing, speaking, and listening at the college and career readiness level; demonstrate independence in gathering vocabulary knowledge when encountering an unknown term important to comprehension or expression.

CCSS.ELA-LITERACY.CCRA.SL.2 Integrate and evaluate information presented in diverse media and formats, including visually, quantitatively, and orally.